Our second day in Rome was better than the first. We had more time to explore, and though the weather was scorching and the tourists were rampant, we were finally able to see the city by foot and have some free to wander the streets on our own.

We began the day with a ride on the metro to the city (see my post, The downside of Rome, for why the metro was, uh, not the best experience we could have had). Then, we embarked on a brief walking tour during which our wonderful tour guide, Josie, took us through the Roman Forum and around the Colosseum, where we had to navigate through crowds of tourists while being accosted by peddlers offering “exclusive” tours. The Colosseum is as big as I had imagined. Standing next to the massive structure made me think about how small I was not just in size but in relation to to the world’s history. This amphitheater is 1,400 years older than my entire home country, and more major events have occurred there than days that I have been alive. Tourists and peddlers aside, standing outside the Colosseum was my favorite part of being in Rome. 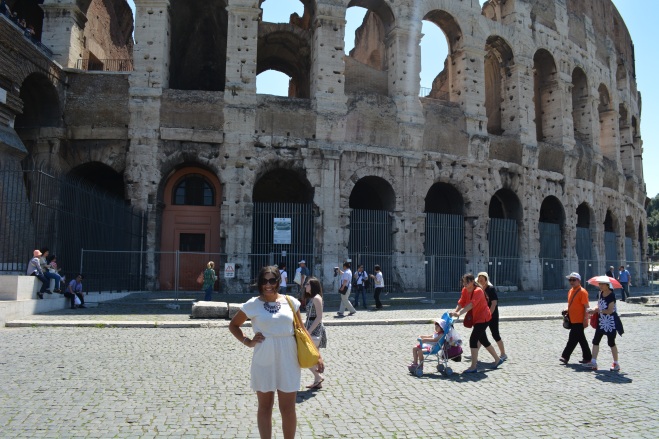 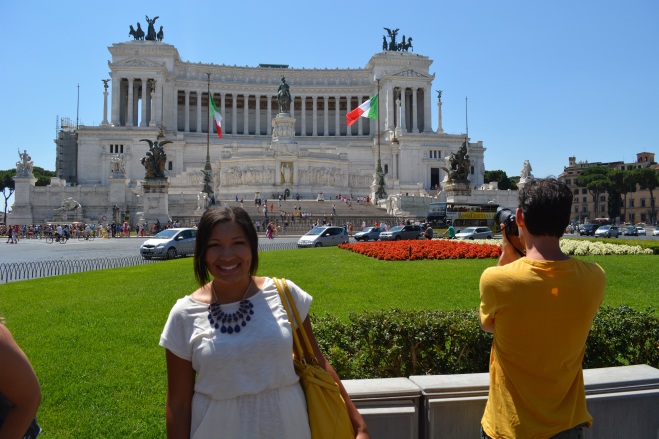 Our walking tour dropped us off along Via del Corso, a long street with a bunch of shops. A few friends and I  broke off from the group and visited the Disney store (my friend Sasha is obsessed!) and looked into a few other shops along the street. Afterward, we grabbed lunch at a small restaurant nearby. We were surprised by the quality of the food at the restaurant — Sasha’s pasta closely resembled Easy Mac and my pizza was nothing more than a tortilla covered in tomato paste and a few shreds of mozzarella. But we were starving and swallowed it all down, ready to get back to exploring. We stumbled upon a charming street market where we found a few souvenirs for friends and some great street art.

After making our purchases, we continued walking down the street, shocked to find that it dropped us off right at the Trevi Fountain! Well, what was left of the fountain.

The Trevi fountain is currently under construction as the Fendi fashion house pours 2.18 million euros into restoring the historic site. While I’m glad that Rome is actively upkeeping its monuments, it was a bit of a bummer to see the fountain gutted and covered in scaffolding. But..I snapped a few pics with it anyway.

After all of that walking around, we realized we were hungry again (that  wasn’t the most filling). So Sasha, our friend Kharah and I wandered down a few more streets until we happened upon an alluring restaurant. It was called Dakota Cafe, and I highly recommend it for anyone traveling to Rome because of the fantastic wait staff. We ordered espresso and Kahlua drinks, which were perfect and cheap, and when I spilled my friend’s drink on my white dress, a server immediately came up to me and offered to help clean up. She ran across the street and came back with a spray can and a brush. Apparently, the spray had some magical stain removing powers and I was to spray it on my dress, wait five minutes, then give the spot a good brush and I’d be good to go. It worked wonderfully, and I thanked the waitress profusely. I’m not sure if helping customers get stains out of their clothes is customary of the Roman restaurant industry, but I was blown away by the kind act regardless.

We soon left the cafe, and with only an hour left before we had to meet up with the rest of the Contiki group, we wandered around the street some more. We were not using any maps and did not know where we were, but the same way we stumbled upon the Trevi Fountain, we happened to walk right into the Pantheon. We were crunched for time, so we could not go inside, but we walked through the plaza and took in the huge, grandiose building.

Minutes after we arrived at the Pantheon, we watched police chase down a street merchant who had been caught selling illegal merchandise. It was a riveting burst of action at the end of our day, and definitely added excitement to the adventure. And don’t worry, the police caught the guy.

We then headed back the Colosseum to meet up with our tour guide and snapped a few more pictures with the extravagant structure. All three of us were disappointed we did not have enough time to go inside, but we figured we still had a great day and we would just have to come back and visit again some day.

That night, we celebrated our last night on the Contiki tour with a huge bash with our comrades. Everyone adorned themselves in “I Heart Roma” t-shirts and went to the on-site club to drink, dance and write notes on each other’s shirts with permanent markers. It was a great way to end our trip, and we all got lovely souvenirs out of it. I retired early that night, needing to get some rest for the next day, when I’d be packing up and leaving for Switzerland!

Lucky to be here. View all posts by Lexi

One thought on “Rome take two, and the end of my Contiki tour”