TORONTO, CANADA spans 2,751 square miles and has a population of more than 5,580,000. It boasts more than 100 attractions, from museums and historic sites to restaurants and markets. With so much going on, it seems nearly impossible to truly explore the city in 30 hours. But my friend Sarah and I managed to do it — and here’s how:

DAY 1
Getting Acquainted to the City (1 HR)
Checking into the Hostel (.5 HRS)
Buying a CityPASS (.5 HRS)
Climbing to the Top of the CN Tower (3 HRS)
Exploring Downtown Toronto (2 HRS)
Getting Dinner in Greektown (2 HRS)
Going Out at the Hostel (4 HRS)
Sleep (5 HRS)

1. GETTING TO TORONTO (16 HRS)
Sarah and I both live in the Washington, D.C. metro area, so we took the Megabus from Union Station to Toronto. We left at 8 p.m. Thursday night, anticipating our arrival in Toronto at 10 .m. Friday. We passed through Philadelphia, Penn. and Buffalo, N.Y., making stops at both before finally crossing the border. Once in Canada, we of course had to go through customs, but that was quick and painless. By that point, getting off the bus and stretching our legs was extremely welcome. Two hours after we left customs, we were in Toronto. ($73/each, round trip)

We were way too excited to get the adventure started.

Passports were crucial, of course.

2. GETTING ACQUAINTED TO THE CITY (1 HR)
Having some bus troubles along the way, we finally arrived at the Toronto Bus Terminal at 12 p.m. on Friday. Famished, we first stopped to grab a bite at Druxy’s Deli. Then we headed to the ATM to take out some Canadian money and found a subway station. The Toronto subway, officially known as the Toronto Transit Commission, is refreshingly easy to navigate; there are only three lines and the stops are clearly labeled, both on the maps and at the stations. It took us about 15 minutes to get from St. Patrick’s Station to Donlands Station, which is less than a minute’s walk from the hostel. ($11/day for a 2-person subway pass)

3. CHECKING IN TO THE HOSTEL (.5 HRS)
We had a fantastic experience at The Only Backpacker’s Inn, which is located just on the outskirts of downtown Toronto. We stayed in a six-person mixed dorm (I could have sworn I booked an all-female dorm! It wasn’t too bad though, we didn’t see the guys much, and we kept our valuables locked in a safe). The staff was incredibly friendly and accommodating and they made us feel right at home. We stayed long enough to get our bags settled in and freshen up, and then we were off on our adventure. ($25/each for one night)

Outside of the hostel was hard to miss.

The main hallway inside of the hostel was very welcoming.

4. BUYING A CITYPASS (.5 HRS)
In doing our pre-trip research, Sarah found that it was highly recommended to buy a  $61 CityPASS for Toronto. The Toronto CityPASS is a booklet of admission tickets to 5 must-see tourist attractions in Toronto that saved us 43% compared to combined regular box office prices:

The passes were valid for nine consecutive days and allowed us to skip ticket lines. We bought ours at the Royal Ontario Museum, but decided to wait until the next day to explore the museum. Instead, we took advantage of the gorgeous weather and headed to the CN Tower. ($61/each)

5. CLIMBING TO THE TOP OF THE CN TOWER (3 HRS)
I still get chills thinking about it – what a thrill. According to the tower’s website, the American Society of Civil Engineers classified the CN Tower as one of the Seven Wonders of the Modern World (the others being the Itaipu Dam on the Brazil-Paraguay border, the Golden Gate Bridge in San Francisco, the Panama Canal, the Chunnel under the English Channel, the North Sea Protection Works off the European coast and the Empire State Building).

After skipping the ticket lines, Sarah and I went through a brief security check and got in line for the evaluator. We queued for an hour and finally rode the glass elevator up 1,136 ft (346 m) to the LookOut Level. The views of the cityscape, the Toronto Islands and the Billy Bishop Toronto City Airport on Lake Ontario were breathtaking. We couldn’t pass up the opportunity to get a light lunch and some red rosé at Horizon’s Restaurant.  We ended our visit with a stop at the CN Tower gift shop. (Tower cost covered by CityPass, $15/each for lunch, $15/each at the gift shop) 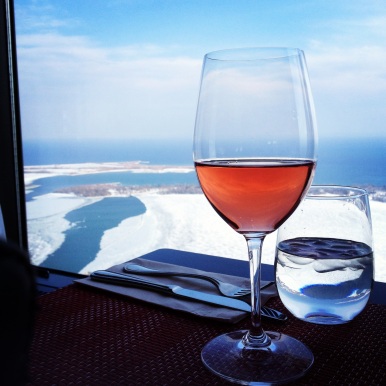 I seriously had the best seat in the house. 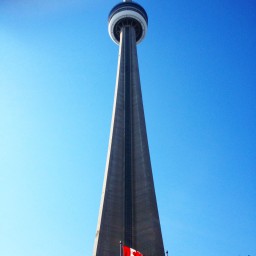 I couldn’t even fit the entire tower in the photo

With a view like this, who cares about the food?

From the top of the tower, we could see for miles.

6. EXPLORING DOWNTOWN TORONTO (2 HRS)
After the tower, we had some spectacular maple lattés at Second Cup Café. With our fresh energy boost, we walked around for a while taking pictures and searching for souvenirs. Finally we made our trek back to the hostel. (About $30/each)

7. SITTING DOWN FOR DINNER IN GREEKTOWN (2 HRS)
Our hostel was in a part of Toronto called Greektown. The streets were lined with Greek restaurants and shops, and naturally, Greek people. We stumbled upon Pan, a magnificent, candle-lit restaurant featuring authentic, gourmet Greek food and walls lined with wine bottles. The food was exquisite and there was even a live band and a belly dancer. I have to say it was one of the best meals I’ve had. ($35/each) 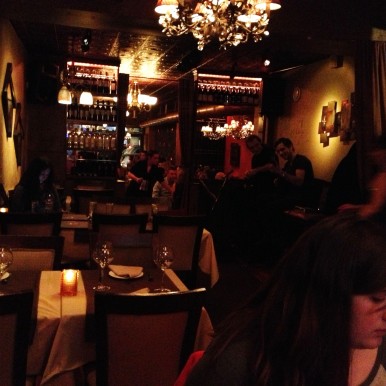 Our dinner was nearly perfect.

I had croquettes, salad, hummus, fresh pita and some of Sarah’s Santorini chicken.

8. GOING OUT AT THE HOSTEL (4 HRS)
Back at The Only Backpacker’s Inn, we relaxed a bit and hung out in the common area with the other young, broke travelers. Then we all went downstairs to The Only Cafe, an awesome local bar on the below the hostel with over 200 beers from around the world. I’ll spare the details of the night, but let’s just say we had a rootin’ tootin’ good time. Cheers to the Maple Leaf.

10. GOING TO CASA LOMA (4 HRS)
We had an incredible breakfast at the hostel, then headed north via the subway to Casa Loma, Toronto’s majestic castle. The castle allows you to “step back in time to a period of European elegance and splendour.” As Canada’s foremost castle, it is the former home of Canadian financier Sir Henry Pellatt and complete with decorated suites, secret passages, an 800-foot tunnel, towers, stables and a garden that we weren’t able to see because it is winter. Both the inside and outside we simply stunning and, as a princess in training, I felt right at home. (Cost covered by CityPass) 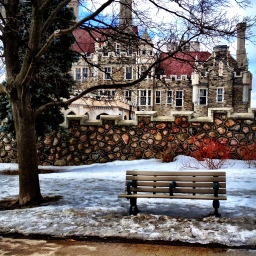 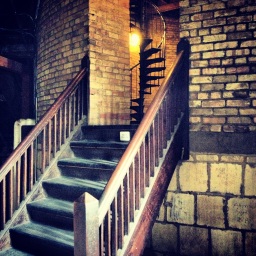 We climbed to the tallest tower. 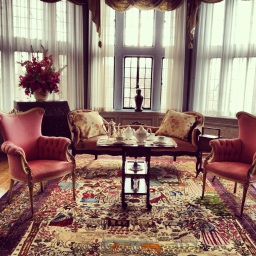 The inside of the castle was fit for a princess.

11. STOPPING FOR LUNCH (2 HRS)
When in Canada, one must eat at least once at Tim Horton’s. So we did. Then we went to Starbucks for some more maple coffee and to charge our iPhones.

12. EXPLORING THE ROYAL ONTARIO MUSEUM (3 HRS)
Last stop on the trip was the Royal Ontario Museum. Again, we got to skip the lines and go straight to the entrance. The museum has four floors of world history and cultural exhibits, divided into eight categories: fashion and textiles, Earth and space, ancient cultures, biodiversity, fossils and evolution, contemporary culture, Canada, and world art and culture. Tired from the previous day’s events, we only stayed a few hours, though I’m sure anyone could spend the entire day there. We still had a chance to see hundreds of ancient artifacts, fossils and works of art from around the world.

We got to hang out in Ancient Egypt.

The museum had incredible modern art, too.

They weren’t the most comfortable chairs, but probably the coolest.

13. GRABBING A QUICK SUSHI DINNER (1HR)
We seriously ate well during this trip. After we left the museum, we headed back to Greektown for our last meal in Toronto. Craving sushi, we stopped at Casa Sushi, a nifty sushi place with more than 100 items on the menu. Sarah got several different rolls, and I got a huge vegetarian platter and a mojito for less than $16. The food was fantastic, the service was eh, but overall great bang for our buck. (about $20/each)

It was more food than a girl knew what to do with.

The Only Cafe was the ideal place to grab hang out with some locals.

14. PICKING UP OUR BAGS AT THE HOSTEL AND HEADING TO THE BUS TERMINAL (2 HRS)
We headed back to the hostel after dinner to pick up our bags and be on our way. Having about an hour to spare, though, we decided to grab one last drink at The Only Cafe. It was the best possible way the end our amazing trip. Afterward, we headed to the terminal and were (kind of) first ones in line, destined for the front seats of the double-decker bus. The ride home went a little more smoothly since we were too exhausted to care about the tight space, and after 14 hours, we were back in D.C.

There ya have it: Toronto in 30 hours, excluding travel time to and from the City. Though we didn’t hit all of the attractions covered by the CityPASS, we still saved a few bucks with it.  If I could have done anything differently, I would have tried to squeeze in the Science Center on the second day, but we were just too tired for that. Oh well, it’s just an incentive to go back.